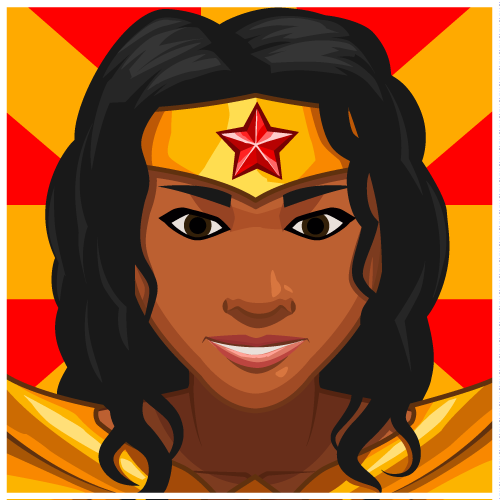 It’s been an interesting week in computer science education. President Trump directed the Department of Education to allocate $200 million per year in existing grant funding to expand K-12 STEM and computer science education. The President signed the memorandum on Monday joined in the Oval Office by students from local chapters of the Boys and Girls Clubs of America, YMCA, various educators, Education Secretary Betsy DeVos, and first daughter, Ivanka Trump who is spearheading the Administration's computer science efforts. “I've asked Ivanka to lead up the White House efforts on workforce development, and the initiative today is a critical part of that endeavor," the President said at the signing.

Ivanka Trump joined business leaders on stage in Detroit on Tuesday to announce their own contributions to STEM and computer education. The Internet Association, a trade organization representing internet companies on public policy matters, formally announced a commitment of over $300 million over the next five years from private sector companies like Amazon, Microsoft, and Google.

“Today’s renewed commitment to high-quality computer science education made by the Trump Administration, the internet industry, and other businesses will help ensure all students develop the skills they need to succeed in the digital economy,” said Michael Beckerman, Internet Association President & CEO. “It’s essential that the public and private sectors work together to ensure all American students have the opportunity to learn computer science and take part in the fastest growing sector of our economy.”

On Wednesday, Ivanka Trump, Code.org founder Hadi Partovi, and Microsoft President Brad Smith, paid a visit to Middleburg Community Charter School in Middleburg, VA. Trump, Smith, and Partovi spoke with a classroom of 10 and 11 year old students about the importance of coding and computer science,“I’m so excited to be here talking about STEAM,” Trump told the students.“It’s such an important fundamental skill. Technology is reinventing every industry. We’re fully committed to making sure every child has the same opportunity and creating amazing pathways to jobs of the future.”

Excited to join @BradSmi & @hadip for a morning of coding w/ these amazing students to highlight the importance of CS education. #CSforKids pic.twitter.com/DUlyMeGndV

Smith told Middleburg students who have been learning code through Code.org’s Hour of Code event, “...you all have a head start, and I think that’s really exciting, because as Ivanka said, the future really is about boys and girls, it’s people of all backgrounds, people of every race.”

Partovi who has been a tireless advocate for computer science and lobbied the Trump administration for the funding, told students how his father taught him how to code when he was 10 years old, “every kid should have the opportunity to learn this but our schools don’t teach it,” Partovi said.

“Computers are here to stay and are changing things about our lives. My goal with Code.org is to help get computer science into schools and it’s especially important [...] to let every kid have the opportunity to learn (coding).”

After the group addressed the students, and asked them to demonstrate what they’ve learned by doing an Hour of Code, the school gathered for a final assembly and group photo, ending a surprising week of computer science announcements from the administration and private sector. 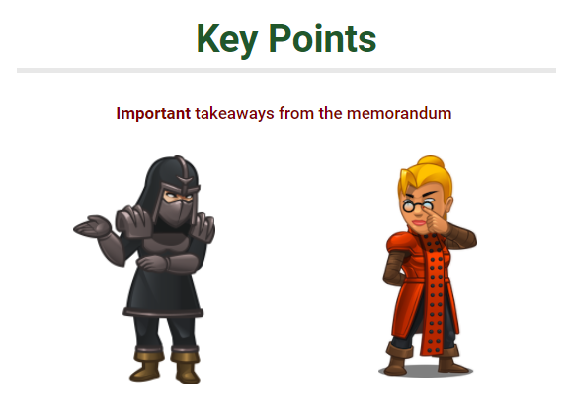 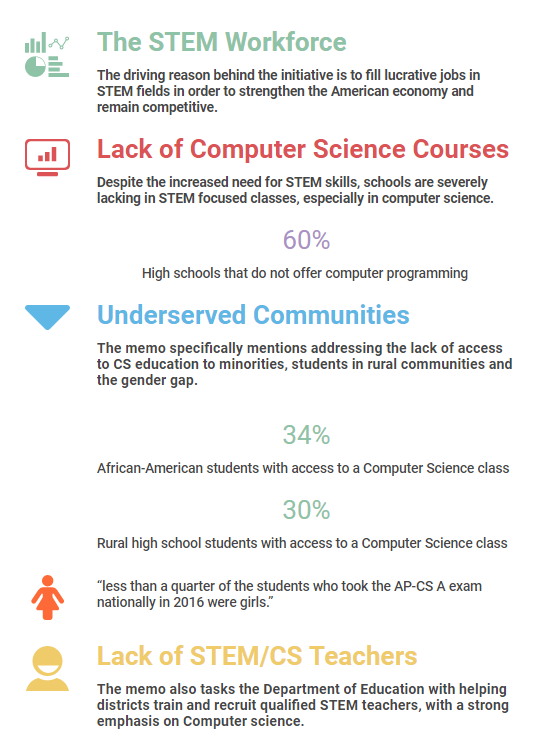 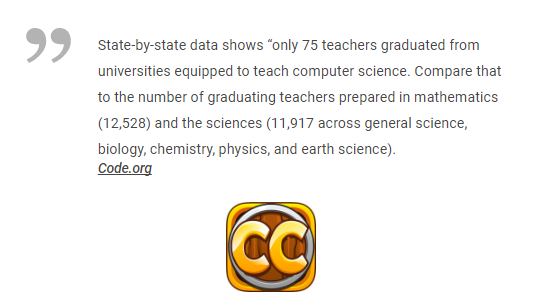 Questions We Still Have

The President has tasked Secretary of Education, Betsy DeVos to make it a priority at the Department of Education to focus on expanding and promoting “high-quality” STEM and especially computer science Education when devoting existing grant funds in fiscal year 2018. All plans must be communicated to Mick Mulvaney, Director of the Office of Management and Budget (OMB Director) every year before funds are granted, including reports within 90 days after the end of the fiscal year outlining how grant funds were spent and how well they succeeded in expanding computer science access to students.

The Obama Administration lead an audacious initiative last year with “Computer Science for All”, which among a long list of commitments called for $4 billion in funding for states and $100 million for school districts to expand K-12 computer science education - money that never materialized, at least from the federal government. Some private funding did make it to students for STEM and CS education and from the federal government through the National Science Foundation and AmeriCorps - though it was a far cry from the promised $4 billion.

President Obama’s proposal was for new funding to an oftentimes contentious Congress that delayed passing a budget, essentially killing the core of the CS for All proposal, a point acknowledged by a senior Trump administration official, “While the previous administration recognized that this was an important initiative, ultimately, beyond the announcement, they were not able to act upon it because they did not get the congressional legislation they needed”.

President Trump’s proposal is seeking existing grant money to be directed to funding computer science programs. Congress would still have to pass the budget for the fiscal year, but the money would essentially already be earmarked for computer science.

Which programs will lose funding?

It’s up to the Department of Education when and how they follow up to the President’s announcement about specific grant allocation details. Questions will certainly be asked about what programs will lose funding at the expense of expanding computer science. Will schools or districts unknowingly decrease offerings in humanities, arts, sports, or other areas?

It’s important to note that President Trump’s initiative was only announced this week and there’s a few months before the next fiscal year.

Someone who isn’t worried about how non-computer science programs will be impacted is Hadi Partovi, who said in an interview with EdSurge, “What it does is it focuses existing funds towards schools that teach CS.” He added that school districts applying for grants from the Federal government can get the same funding as before but “they’re now encouraged to include a proposal to expand access to computer science, with a focus on diversity.”

How soon will districts and nonprofits have access to federal funds?

This is another question where we have limited details to draw from, but from the initial memorandum it appears the President expects things to move swiftly within 30 days of “Congress passing final appropriations for each fiscal year”. The specific grant time frame and details have yet to be announced by the Department of Education. Betsy DeVos has yet to make any announcements and the only acknowledgement of the proposal came from Twitter retweets by the US Department of Education of the President’s initial signing and of Ivanka Trump’s #CSForKids Detroit announcement. Schools won’t be able to directly apply for federal funds but their districts can.

Will there be one central location for schools/districts to apply for the private funds? Will private funds we allocated by the businesses themselves?

Fewer details were offered by the private sector businesses about how schools and districts will be able to apply for grants. However, most private funds will be distributed on a company by company basis over the next five years with each pledged company outlining their own application criteria and no one specific organization handling distribution. Some companies are already rolling out press releases about their initiatives: 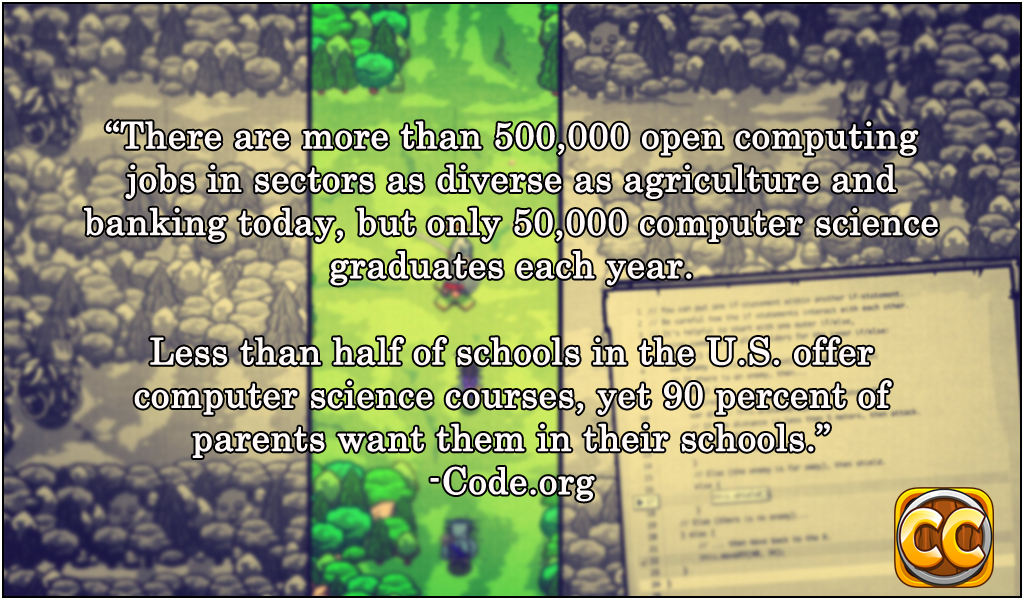 Even with all the questions we still have, it's promising to look at the possible doors this opens for CS educators and students. Depending on how the final numbers play out, the amounts allocated to each school, and programs chosen, the combined funding could put at least one qualified computer science teacher in every school in America, which for now seems like a positive direction for the future of computer science.

Continue the adventure! Share your pictures, stories and feedback with us on Twitter & Facebook, join the discussion on our Forums or contribute to our open source community. Are you a teacher, CS advocate, parent or administrator? Want to blog for us? Check out this post.